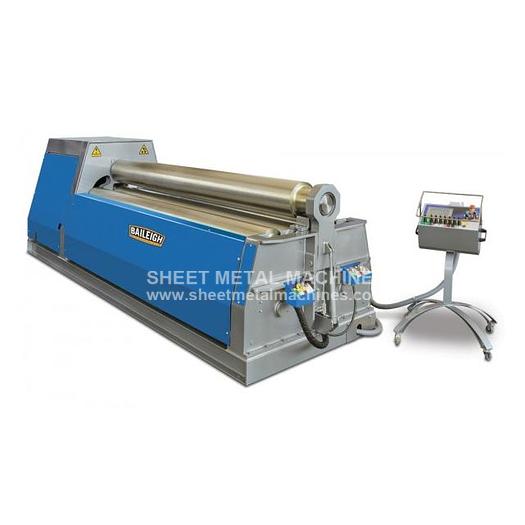 Please note: many products ship straight from manufacturer BAILEIGH Plate Bending Machine PR-10500-4NC PR-10500-4NC numerically controlled four roll plate bending machine is the next step in production plate rolling. This 10 foot ½” mild steel machine features a new and evolved numerical control with the following features. This new easy to use touch screen controller has the ability to control three bending axis (X Y Z), two side supports, central support, and the pinching action. It can also store 300 programs with 99 steps each; this is great for those odd shaped jobs that come about. What make a 4 roll plate roll so great? A 4 roll machine is the easiest, quickest, rolling machine to operate thanks to its ability to pinch the plate between the 2 central driven rolls, pre-bend the leading edge, and rolling the body of the part along with the trailing edge all in one direction and in one pass. There is no chance to lose the position of the plate due to being pinched at all times during the rolling cycle. The 2 central driven rolls on the PR-10500-4NC plate bending machine are rotated by hydraulic motors and high efficiency planetary gearboxes coupled directly to the rolls. This hydraulic gearbox is driven by a large 10hp motor that operates on 480volt three phase power. 1/2" mild steel capacity 120" lengthu 4 forming rolls 2 driven rolls Hydraulically driven Moveable console withthree axis NC control Storage for 300 programs with 99 steps in eachprogram Touch screenu Hydraulic system for helping to remove material Epicycloidal gear boxes Hardened and polished rolls Conical bending system Torsion bars for perfect parallelism Planetary movement of side rolls